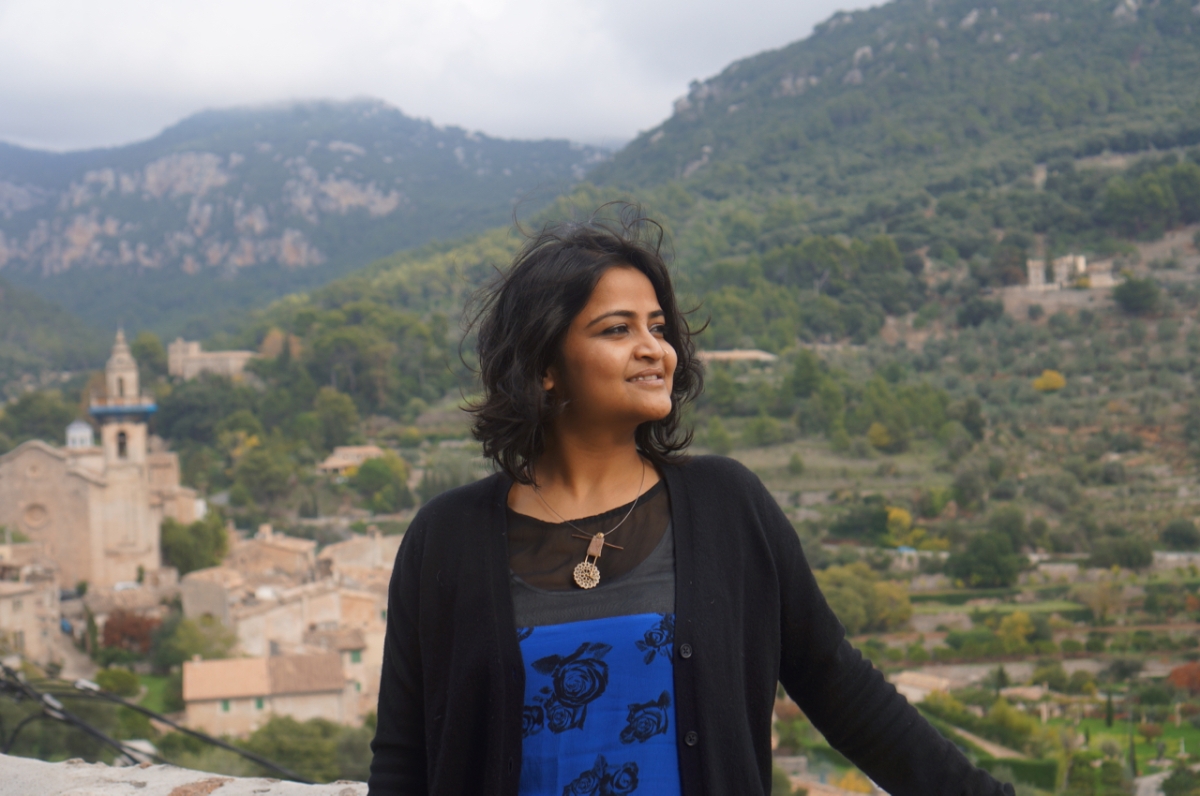 One other thing I find very inspiring about Geetika Agrawal is that she always listens to the signs. “I feel like there is a power that is always guiding me in what I’m doing and I’m always manifesting it somehow. I keep my attention really strong, I’m always very true to myself and very connected to myself inside. When something happens, I know that this aligns perfectly with that. And then nothing can stop me.”

On November 26, 2015, Geetika was working all day and way into the night. This month, her year-long sabbatical brought her to India. Tonight Geetika was determined to publish the website and launch her new business, VAWAA, Vacation with An Artist. She spent the past six months on the road working hard at this idea, building its foundation, personally meeting the artists, and curating experiences for her future clients. But for now, she believed, no one yet knew about this great service, so tomorrow she was going to the camping grounds in the mountains to disconnect and recharge in the nature. Long past midnight, she made her site live, shared it with friends on Facebook and went to bed.

Geetika, who describes herself as “a creator, an optimist and a lover of adventures and beats,” was born in the foothills of the Himalayas in Northern India. Although no one in her family or among their friends was a professional artist, artistic pursuits, curiosity, learning, and adventurous open-minded outlook were encouraged. Geetika studied architecture, planning to stay in India and work in her field. But when she learned about ArtCenter College of Design in Pasadena, California, she took a chance and sent in an application. “That got me really excited, I wanted to combine technology with architecture.” Her career in architecture was short, only 6 months. And then she was off to Los Angeles to take on a new adventure.

After her move to the U.S. in 2002 and graduation from the Master’s program for Industrial Design, it took many years before the next time her stars aligned again allowing her to embark on the next life-changing venture. These years were not easy, but they were also filled with many joys – fulfillment of doing creative work, learning and growing in her profession, leading successful design projects, volunteering, and mentoring. She taught Interaction Design at the School of Visual Arts in New York, and has worked for global clients such as The Lincoln Center for the Performing Arts, MasterCard, MTV, Disney, Samsung, and Microsoft.

Traveling, of course, was always a large part of her life. “I used to travel so much and always ended up having some amazing experiences. None of them were ever planned. And people always asked me how I found them. I don’t know, they found me!” One of her travel stories kept me sitting on edge.

It happened in Chile. At a mixer at the co-working office she used, she met a local guy, who would not give her his name, nor ask for hers. He wouldn’t tell her what he did either. But he did make a lot of jokes and also told her that, if she was interested, he would be happy to take her on a bus ride to explore some crazy landscapes. And then he disappeared without leaving her a contact number. A few weeks later, they met again. He asked about her plans that evening, saying, “meet me here, in the co-working space, and I’ll come with the bus.”

That he did! It was a school bus that didn’t have any seats just mattresses with musical instruments bestrewn all around. “I still didn’t know who this person was, what he did. I just knew he was from the co-working space and I guess he lived up to his word so I decided to follow him.” Geetika invited two other friends and the four of them drove off. “It’s dark, we are driving outside of Santiago. We are moving closer to the mountains. It’s almost ten-thirty by now. We reached the base of the mountain that had a really, really large gate. Now what? It turns out he has the keys to the gate. Which means he has the keys to the mountain!”

To me this story sounded like a beginning of a horror movie. I am a risk-taker, but trusting a stranger is always a dangerous decision. It’s like a samurai’s sword – it could be a beautiful object or a fatal weapon. You really have to have well developed intuition and trust in your gut-feeling. It’s an integral skill for all the nomads of the world. Of course, Geetika’s Chilean adventure ended well, with a late night musical performance by their new friend with a hill-top view of the entire city, sparkling with lights in the dark like a shoal of fireflies. Since then they had met in New York several times and their friendship has continued.

Upon hearing her stories, people encouraged her to start a business designing experiences for others. That was a challenge because she didn’t know where to start; she had always worked for others. Being creative, Geetika had many potential business ideas, but there was one that persisted. Its origins could be traced to her college summer holidays when she worked with artisans in small towns of Rajasthan and Tamil Nadu in India, apprenticing and getting to know the “how to” of their craft. Later, during her travels, she took any opportunity to learn something new, often by doing it herself. “As a traveler, I am very good at observation and seeing how other people are moving around in their space, what they are doing, and becoming a part of that. My curiosity usually leads me to start a conversation.”

Her first memorable experience of doing an impromptu apprenticeship happened in Indonesia. Walking around, Geetika saw a jewelry workshop inside a store. “I got curious about the studio, about what they were making, and I started asking questions. That just turned into an exchange and then I simply said, ‘It’s super fun, can I try making this?’ I think a rapport was already built. And I didn’t even have to say ‘Can I learn this?’ I just started doing it. Before I knew it, I was there for 3-4 hours.”

Unless you feel at ease talking with strangers or accepting invitations to visit their homes in places where you don’t know anyone, it is difficult to find opportunities to do apprenticeships with local artists or craftsmen. Geetika’s idea was to find these masters and facilitate worldwide connections. “My goal was to meet the artists and understand if they were experts in their craft, how amazing they were at what they did, whether they were willing to share their expertise and if they were really interesting people.” Things were brewing in her mind and the Universe obliged to deliver.

Her opportunity came in 2015, when two friends told her about the Remote Year program. “As soon as they said it, I knew that I was going to do that. I made up my mind in half a second. I just knew this was what I was waiting for, that it was going to be my parachute to jump of the cliff. I was not gonna let this go.” In 2 months, she managed to get accepted into the group of travelers that by then was finalized. She organized her affairs, packed her apartment into a storage room, arranged at work to take a sabbatical, and on June 1 she joined 75 other travelers to spend the next year in twelve different countries around the world.

Six months later, on November 27, she found herself on the way to a camping site in the mountains in India closing her first sale. “That morning I woke up and there was a booking from a girl in Austria. But the site wasn’t even ready to accept payments! I knew it was a powerful idea, but things take a while.” It was totally unexpected and exhilarating. On the way to rent a car and then while driving to the campsite, as far as the reception allowed, Geetika managed to communicate with her first client, arrange for payment and finalize the reservation.

Now, VAWAA is in its third year. Every month, Geetika and her team add new artists to their roster. You can learn the art of tattooing in Barcelona, Spain, bamboo bicycle making in Bagalore, India, ceramics in Ostend, Belgium, darkroom printing and film photography in Lyngør, Norway, contemporary dance in Sofia, Bulgaria, stone sculpture in Arusha, Tanzania, and textile printing in Bayonne, France. These are just a few of so many learning opportunities to make a trip unforgettable.

Her current challenges are many: 10 different inboxes full of emails, funding for her business, constantly keeping in balance the idea of expansion as the business grows and the original idea of curated personal experiences, making enough time for herself to rejuvenate, and dealing with the challenges of being a nomad. However hard the life of a traveling bootstrapped entrepreneur is, Geetika is keeping on top of her game. She makes sure to enjoy every day with all its difficult and joyful surprises. That is until the next time her stars will align and push her forward.

To learn more about VAWAA and book your vacation with an artist: Visit their website at vawaa.com and connect on Instagram https://www.instagram.com/vawaa

Passionate about people with passions, I write about artists, their lives and artistic journeys; sometimes, I post my musings on exhibitions that speak to me. I don't believe in critiquing, but I believe in connecting. Knowing someone better hopefully leads to understanding, which also gives rise to a connection (intellectual, emotional or spiritual). People, who establish such a link with an artist, are more likely to want to live with their art. And, not only, often buying an artwork is a gesture of support for the artists we like and encouragement to keep creating. To quote Swiss curator, artist and art historian Harald Szeemann, "If the personal relationship is taken out, the dimension of intimacy, then the museum and art business gradually starts to become annoying." View all posts by YABNYC